The Gary Staley Memorial Fund was established in honor of Firefighter Gary Staley who lost his life in the Line of Duty on January 19, 2003.

The primary purpose of the fund is to provide financial assistance to Fire Fighters concentrating in but not limited to Montgomery County, Texas.  The ultimate goal is to provide lifesaving capability training for the benefit of both the Fire Fighter and the members of the community for which they serve. Over 200 scholarship grants have been approved since the inception of the program.

at the Oakhurst Golf Club.

To Register for this event:

Individual contributions and annual golf tournaments have provided over $300,000.00 to the Gary Staley Memorial Fund.

Gary was born on June 16, 1969 to very proud parents Don and Ruby Staley.  Gary had two siblings, Karla and Matt.

In 2000, Garry announced that he had joined the Porter Volunteer Fire Department as a volunteer Fire Fighter. He had no previous interest in being a Fire Fighter.  His full-time career was held as an Accountant at Anadarko Petroleum Company.

In 2002, Gary was very proud and excited to be honored with the Rookie of the Year award at Porter Fire Department. He participated in over 300 fire calls and Gary felt he had indeed found his niche in life.

On Saturday, January 18, 2003, Gary was helping his father clean out a storage area in Kingwood and they had a great opportunity to talk about a variety of things. One of the comments he made, was that it was the dream of most Fire Fighters (and his) to be in the position to save a life in their role as a firefighter, but most never had the opportunity. Later that day, he spent quality time with his mother and then took his nine year old daughter, Courtney, bowling and spent the afternoon with her. That evening, Gary and his brother Matt spent the evening together and quality time with each other.

The following day, January 19, 2003, smoke was coming from a burning building down Loop 494, Gary was fighting that fire.

About four hours later, there are four Fire Fighters walking up the steps of his parents home and Gary was not with them. They looked out the glass door and immediately knew the message they were bringing.

Gary's dedication to the fire service was shown in his last efforts. There were four Fire Fighters responding to the fire.  As they went into the burning building, they did not know if the building was occupied. Gary was the fourth man in the fire and was at the back end of the hose. As they walked into the building, Gary’s last words were said to Juan Chapa, the third fireman, "I’ve got your back".  The building was engulfed in smoke and flames and the Fire Fighters had extremely limited visibility. Gary left the hose line to get a spot light so they could see to direct the water flow to the source of the fire. Shortly thereafter, there was a flashover and the Fire Fighters were in severe danger. The first Fire Fighter, was Gary’s friend, in this state of panic, he took off his gloves and sustained serious burns on both hands as he followed the hose to safety. The second Fire Fighter was crawling out on his hands and knees following the hose and rammed his head into a metal support pole that dislodged his helmet burning his face. Gary saw that he was in trouble and was able to get his helmet re-secured and the fireman pointed to the exit. He escaped with minor burns on his face. Gary immediately went back further into the burning building looking for the fourth Fire Fighter not knowing he had escaped while Gary was helping the third Fire Fighter. When Gary proceeded further into the building, a race car loaded with nitrous oxide exploded nearby and Gary was fatally injured. Gary left behind a beautiful daughter Courtney.

It is in his honor that this Memorial Fund has been established.

A special thank you is extended to the many volunteers and especially to the Porter Fire Department who have diligently worked on the annual golf event. The hole sponsors and volunteers have been unbelievably loyal providing support each and every year. We are so grateful for their support in honor of Gary and to provide training needs and equipment for their safety.

Contributions to the Gary Staley Memorial Fund should be sent to: 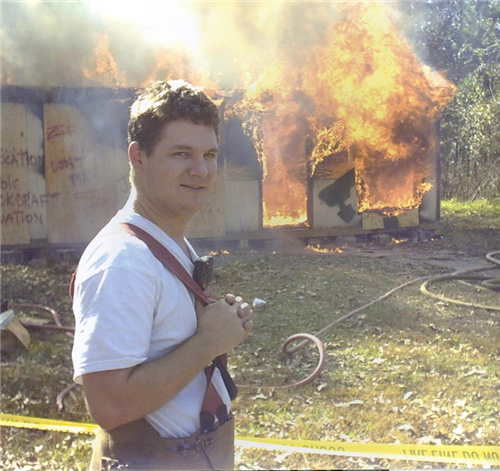